Believe it or not, converting recipes to 21 Day Fix container equivalents isn’t an exact science. In some ways, you might even consider it an art. Here’s an explanation of how it’s done.

The premise of creating the container system was simple. Divide a wide variety of healthy foods into a series of colored containers to help people learn how to eat right.

How We Picked What Foods Go Into Which 21 Day Fix Containers
The execution of the system, however, wasn’t so simple. Foods needed to be divided not only into various types of food (fruit, veggie, etc.), but they needed to be divided by macronutrients levels so people get a balance of protein, carbs, and fat. We also needed to consider calories by volume because sometimes the same amount of seemingly similar foods can have very different calorie amounts. This is why there are two fat containers: orange and blue. The foods in the orange containers have more calories by volume, so a serving would contain too many calories if measured in a blue container.

This is also why tomatoes are on the green list, but tomato sauce and salsa are purple. They may, basically, be the same food, but sauces tend to have more calories by volume, so a green container of loosely packed, chopped tomatoes and a purple container of marinara sauce have roughly the same calories. (Tomatoes straddle the line between veggie and fruit, which is another reason they make sense in either container.)

There were scores of choices like this that needed to be made—and oftentimes hotly debated. There were also the educational considerations. For example, treats replace a yellow container in the 21 Day Fix plans. The reason for this is that the foods in the yellow list are among the least important foods in the average diet (considering the green and purple both contain arguably healthier carbohydrate sources) so it made the most sense to sacrifice those if you want to be a little naughty.

Bringing Recipes Into the Picture
When recipes are built specifically for the 21 Day Fix, matching containers is easy. Ingredients are selected from the lists in container-friendly amount and there you go! But matching containers to recipes not necessarily built with the 21 Day Fix in mind is another story. Many of the ingredients aren’t included in the Fix and if they are, they’re at amounts different than the containers. The levels of protein, carbs, and fat need to be considered. Calories need to be considered. These considerations are multiplied by the already-mentioned considerations of the containers and, well, that’s a lot of considerations!

But wait, there’s yet one more consideration: what makes sense to you, the reader? Often, container choices can make complete sense scientifically, but maybe you see ingredients that you feel should have been better considered.

There’s also the consideration of which consideration to consider first! (Are we having fun yet?) Deciding this lends a high degree of subjectivity to the process.

So, we welcome you to be part of the conversation. If you have a question about the portion choices we’ve made in a particular recipe, come on over the Expert Advice section of the Team Beachbody Message Boards.

Or at least consider it.

I am still trying to process everything that was discussed on this episode. There is all kinds of good stuff in here about how your diet effects pain, how training in heat can help you deal with injury, and how your doctor might not really be the guy to go to for depression. Please enjoy and let’s process this together in the comments.

The following notes were done by the POWPERFUL u/JoshuaKevinPerry on reddit. If you found them useful tip him a couple bucks https://www.paypal.com/cgi-bin/webscr?cmd=_s-xclick&hosted_button_id=26LWYHVA6V5QS

For podcasters show starts at 7:45

Today’s guest is Dr Rhonda Patrick https://twitter.com/foundmyfitness?lang=en she has a youtube channel that explains everything she specializes in, it’s good stuff. https://www.youtube.com/user/FoundMyFitness For sure, read the wikipedia articles. Let me assure you right now: there are dick jokes on the way. via youtube setup

19:30 http://www.alzforum.org/news/research-news/cold-shock-protein-reinvigorates-synapses Definitely don’t try to give yourself hypothermia for brain health.

32:00 Vasoconstriction is the narrowing of the blood vessels resulting from contraction of the muscular wall of the vessels, in particular the large arteries and small arterioles. The process is the opposite of vasodilation, the widening of blood vessels.

Rogan should have an ebay auction on all the free shit he gets. Chairs, toilets, workout equipment.

Junk food is literally that, empty calories of energy that provide little nutritional value and usually are stored as fat. Yet junk food is irresistible and for good reason – companies spend tens of millions engineering it to be that way. It’s almost evil. Click below to get super educated on this matter. Thanks Josh and Chuck for letting us all know what’s up! All of the links for what is discussed in this episode are below the download link.

How Junk Food Works, on HowStuffWorks

Is high-fructose corn syrup bad for you? 2009 SYSK episode

Encyclopedia of Junk Food and Fast Food, on Academia

The Extraordinary Science of Addictive Junk Food, on the New York Times

RIP Cereals: 34 Parts of A Complete Breakfast That Are No Longer With Us, an SYSK slideshow

Your Apples Are A Year Old, on Food Renegade

In my last post we talked food, protein, and supplements. Due to my finances, I really can’t afford to buy fresh veggies. Well ok that’s not totally true, I can’t afford to buy fresh veggies knowing that they may go bad before I can eat them. So my partner and I put some resources into powdered food. We had been using powdered milk for a long time, it doesn’t go bad and makes decent tasting milk. Note I said decent not Fantastic. She doesn’t really drink it a lot and I have trouble digesting it so powdered was the way to go for us.

With this prior success we decided to buy a lot of different powdered foods. We have kale, spinach, butter, yogurt, 2 different cheeses, peanut butter, banana, lemon powder, brown gravy, eggs and even whipped cream. many of these have been used in recovery shakes that my partner has concocted. ok before anyone pukes on their screen the cheese, butter, gravy, and eggs are not going to show up. I’m still hoping one of them will have whipped cream on top 🙂

To make these more filling we did go and buy some frozen fruit for a little bio mass. here are some example recipes, we have used. Remember these are all still in Beta so you may not like some of them because I know I sure didn’t 🙂

Here are two examples that are 2 servings each

This is how my diet typically looked 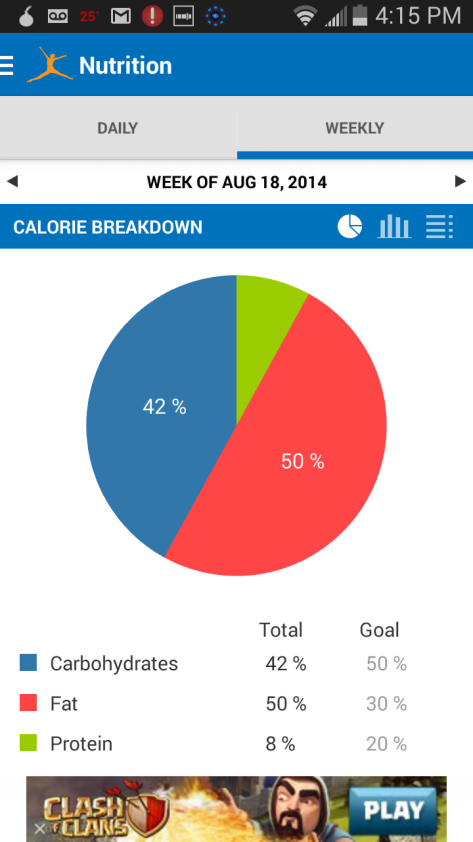 So now we can see why I had a weight issue. The goal is what is set as default in MyFitnessPal (totally recommend downloading that). So I am assuming that is a normal diet. We can see that I was not really doing so well.

The week of my 30th birthday I decided that I couldn’t treat my self like that anymore and we can see here what changed.

I bought T25 at the end of that week and had to wait on shipping. Here is now things are looking are now.

Not too shabby. I did run into some issues however. You noticed above that my protein was way too low. Once I started paying more attention I realized I still wasn’t getting enough protein. So I did some research into protein powders.

I know this is a hotly contested issue on the internet and I am not calling myself an expert by any means, if anything I am a lab rat on this subject. I did however look at some research from the Mayo Clinic which basically said, and I’m paraphrasing here “Protein is Protein”. They did say that egg protein was the most complete but that protein is protein. This being said you can get this from food, and that is probably the best way to do so. But I am not in a financial situation right now that is going to allow for quality meat purchases right now.

So my choice was Whey Protein. Most people out there are now thinking “Whey Protein, do you even lift brah?!?” and the answer is… no. I understand why people would be concerned. Most people use Whey Protein to add more protein than normal so they can get swole. I needed it because I had a protein deficiency.

We’ll talk more about my diet in the next post…

Harmony of Body, Mind, and Spirit to Tune Your Human Machine

Thank you to the following: